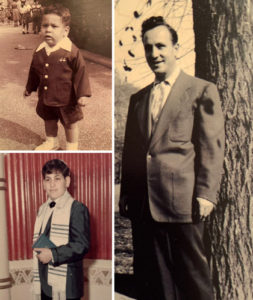 The young boy named Richard Blum had not yet morphed into Handsome Dick Manitoba, which was to become his stage name starting in 1973, for all eternity.

One of RICHARD‘s great joys growing up in the Bronx was coming down on the #2 train with his father and proudly calling out the name of every train stop before they got to the stop. “Dollar Bill” Blum, (Richard’s father‘s nickname) and his beloved son would head down to Midtown Manhattan to walk around and see what Broadway had to offer.

One of the places was Jack Dempsey’s Broadway Bar and Restaurant. Jack was the former heavyweight champion of the world, and Dollar Bill’s favorite when he was a boy. 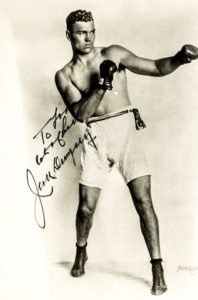 On this day, father and son passed by Jack Dempsey’s. Jack was sitting in the window doing some paperwork when Richard’s dad tapped on the window and Jack waved to them. The young boy (future Handsome Dick Manitoba) was beyond impressed and excited.

The large Broadway bar & restaurant centered in the middle of the excitement of Broadway, Midtown Manhattan, with Jack’s name, a very large sign sitting atop the restaurant was enough to send chills up young Richie Blum’s spine. He didn’t know he would turn into a performer and egomaniac, a guy who wanted to take big bites out of life until later, but he knew deep in his gut, he wanted something close to Jack Dempsey‘s.

The restaurant, with the Broadway lights and the buzzing of the people walking up and down Broadway made Richie realize “I want to have a place like this of my very own one day”.

It was later in the young boy’s life that he realized the BRILL BUILDING, which produced about 5 million hit songs was right next-door to Jack Dempsey‘s. The stories he heard from the legendary Mary Weiss of the Shangri-Las included history of the Brill Building, Jack Dempsey’s addition of the boxing, rock ‘n’ roll folklore and overall love of the area.

Let’s move the clock up about 36 years. The now man known as Handsome Dick Manitoba got his dream. Was it as big and mighty as Jack Dempsey‘s bar and grill on Broadway? Of course not! You could not have a place that big on a narrow Avenue in the East Village neighborhood of New York City. It’s a little neighborhood upstairs and downstairs rock ‘n’ roll bar in the aforementioned East Village called surprisingly enough, MANITOBA’S.

The funny thing about the bar, is there is a gigantic sign on top of the bar: “MANITOBA’S”, a sign so big it isn’t befitting to the size of the bar below. So yes, the young Richie Blum did get his bar, a smaller bar, but he got his sign, a gigantic sign and that was enough of the dream to fulfill him for years to come.

As of this writing, the bar has been open about 20 years. 20 years ago, this neighborhood was a different world.

Based on how valuable real estate has become in this neighborhood, I don’t know how long we will be open…. but I can tell you this…. for just about 20 years, people all over the world and all over America have come to visit one of the last remnants of rock ‘n’ roll and punk rock in NYC…We have actually become a stop off on people’s lists of things to do in New York City….. a neighborhood bar saving a culture, OUR culture!

I hope we’re here many many more years. I really love this place.

It’s location: 99 Avenue-B, between 6 and 7 streets on the lovely, beautiful green lush island of Manhattan.

Thank you all for your support, and coming to visit Manitoba’s.